On our December trip, our daughter asked about the coins in the water on It’s a Small World.  I told her that people will throw coins in the water when they make a wish.  This prompted her to want to start making wishes, and she needed some coins to do so.  I fished a couple of pennies from my wallet, and (literally) let her throw more money at Disney.

I asked her what she wished for, and she said, “I wish to pick flowers for you, Mommy!”

Okay…that was pretty sweet.  She loves flowers, and she loves to give flowers to people, so it was adorable that she was using her wish to benefit someone else.

So, why am I writing about my daughter’s wish?  Well, it actually came true, in the most amazing, magical, only-at-Disney way.

December was also my agency’s Disney trip, so I had several activities planned with them.  One of which was to watch the Candlelight Processional with Jodi Benson as the narrator.  My husband and daughter were supposed to come sit with us, but she was in a bit of a mood and wanted to do other things, instead.  I stayed and watched while they walked around the World Showcase.

My husband sees that Aurora was scheduled to make an appearance soon, and the line by her sign was very short.  My daughter loves Aurora, so they hopped in the line.  They quickly found out that because of the band that was playing, the line was actually across from Aurora’s sign, and it was a lot longer than they originally thought.  The cast members tried to merge the two lines, and this upset my daughter.  At just 3 years old, she knows that more people in front of her means more waiting.  My husband got upset and pulled her out of the line and said they would just have to see Aurora another time.

This upset her even more, so they got back in line again.  Another cast member came by and told him that if they could wait, it would be worth it.

Boy, was it!
Aurora took my daughter by the hand and gave her a personal tour of the France Pavilion, which also included picking flowers together.  So many flowers!  My husband started taking a video about halfway through, and the PhotoPass Photographer must have taken about 80 photos. 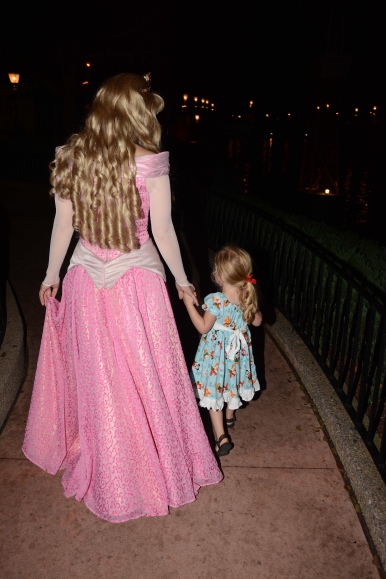 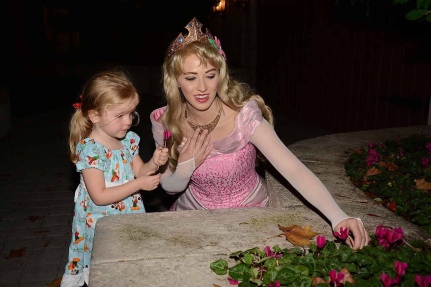 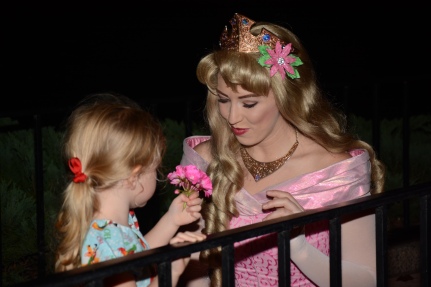 When it was over, they had to get a small shopping bag from the gift shop to hold her flowers.  When she saw me, she couldn’t wait to give them to me and tell me all about her walk with Aurora and going shopping in France.

So from now on, I will let her make all the wishes she wants while we’re at Disney.  The photo at the top of this post is her making a wish in Pandora at one of the streams outside of the Na’vi River Journey just a couple of days ago.  Her wishes were a bit permanent this trip…”I wish Pandora would stay here forever!”  Well, I don’t think it’s going anywhere anytime soon!