We got a late start today after such a late night yesterday. Going forward, I think I will schedule resort days for the day after a party for us and our little one. After sleeping in and Kenzie getting her nap, our morning and afternoon were gone.

My husband went straight over to Tower of Terror to use his FastPass, while Kenzie and I did a little shopping and enjoyed a cake pop on Sunset Blvd. 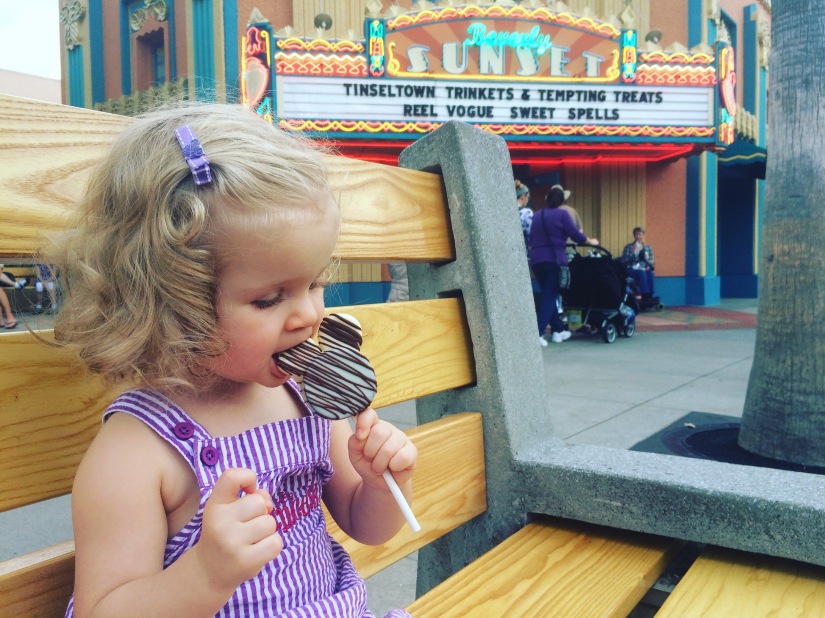 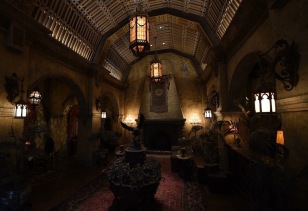 Side note, Tower of Terror is the one ride I refuse to do. I have ridden it. Twice, in fact. Once, because it was my first time, and the second time because I felt I needed to be reminded of why I didn’t like it. I hate being dropped straight down. I hate it, I hate it, I hate it. I have said I will ride it when Kenzie is tall enough, and brave enough, but only for her. Until then, my husband is riding alone.

e hit up the new Start Wars Launch Bay next. Disclaimer:  We are not die-hard Star Wars fans. Yes, we own some memorabilia, including framed posters going up our stairs to the home theater, but I believe we own it because we are big movie fans. I worked at a Suncoast when the original three movies were re-released in the 90s, so I felt somewhat pressured to buy some of the “stuff” that came out at the time. I remember seeing the movies as a kid and liking Return of the Jedi the best, mostly because Ewoks were like live teddy bears.

The new Launch Bay starts off with a short film that consists of some of the filmmakers reminiscing about their first experience with Star Wars, along with several clips from the new movie. Basically, a long ad for The Force Awakens.

When you exit the film, you are released into an area with models and costumes from the movies. Past the former animator offices are the character meet and greets for Chewbacca and Darth Vader. The gift shop is full of DIY model kits, light sabers, personalized Magic Bands, and full size costumes pricing into the thousands!  😱

We wanted to grab a quick bite before heading over to the Osborne Lights, but ran into an issue. In our opinion, quick service options have always been lacking at Hollywood Studios. There are several options over on Sunset near Tower of Terror, but we were headed to the lights and didn’t want to back track. We tried ABC Commisary, but they didn’t have any kid options our daughter would eat. Okay, headed over to Backlot Express.  Closed. I’ll remind you, it’s about 6PM, and the park is open for another two hours. We made our way through the crowd over to Studio Catering Company. Also closed. Our only quick service options were on the other side of the park on Sunset or Pizza Planet. Kenzie had tried pizza for lunch and didn’t care for it, so we weren’t going to waste money on it again. She was starving by now, so mult husband had to run across the park to get her an Uncrustable.

On a normal park day without the Osborne Lights, I could understand the logic in closing those quick service locations early. The late show of Fantasmic! was at 8:30, and it would make sense to drive the crowds to that side of the park. But during this time of year, they really need to adjust the times of their quick service locations around the lights and offer their guests something other than chirps and coffee. Okay, rant over. 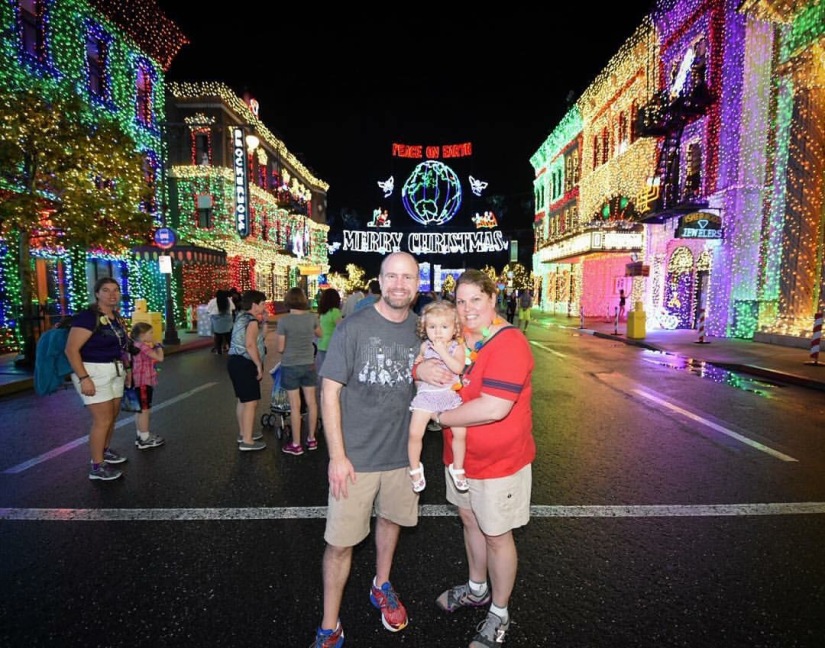 We made it over to the lights around 7:30.  We took a few PhotoPass photos and my husband took several photos on his own.  The crowds began to thin out right after park closing at 8, so our daughter was able to walk and dance around the streets on her own.  She really enjoyed the lights, and we really enjoyed watching her excitement when they flashed to the music.  I love this pic of her just staring at the lights in complete awe.  She looks so tiny!

Important travel tip:  If you want a specialty souvenir, buy it when it’s available!!  We were here Friday night, and I tried to purchase the special Annual Passholder ornament, and it was sold out, but they had the general ornament that looks very similar.  I should have bought it then, because they were out of both when I went back to see if they had the AP ornament.  Now I have to hope my Secret Santa is able to get one for me!  I had planned on that being our “2015” ornament, and I would really hate to have to resort to buying one from the money hungry merchandise hoarders on EBay.  Seriously!!  I just looked them up…$75!!!

Even though we had a late start to our day, I’m glad we decided to come back and see the lights one last time.  They turned them on a week ahead of schedule this year, and my hope is they leave them on for another week in January so we can get one last peek before they are gone forever.  I have seen online rumors that the Osborne Lights will be moved to Disney Springs or Epcot next year, but I don’t think that will happen.  I do see another big Christmas light display in the future, but they won’t be “Osborne” lights and I have no clue where they will be located.  We will just have to wait and see what Disney will have in store for us over the next few years!