At the D23 Expo’s much anticipated Parks & Resorts Panel yesterday, it was announced that Disney plans to add new Star Wars themed lands to both Hollywood Studios and Disneyland Parks by 2020.

There are several new Star Wars attractions slated to begin before the completion of the lands to coincide with the new films being released, beginning with Star Tours:  The Adventures Continue later this year.  The attraction will feature a new adventure with locations and characters from the first upcoming movie Star Wars:  The Force Awakens.  The movie will be released December 18th, so I would predict the additions to Star Tours to take place on or after that date.

Season of the Force is a new seasonal event, scheduled to begin “early 2016” for both Disneyland and Hollywood Studios.  From the description, it sounds very similar to the popular Star Wars Weekends that takes place weekends May-June at Hollywood Studios in Florida, but the “early 2016” throws me off.  Disneyland will put a Star Wars overlay on the current Space Mountain coaster, making it Hyperspace Mountain and also feature special Star Wars themed treats and entertainment.  Hollywood Studios will feature a new fireworks spectacular show set to the movie scores on weekend nights, along with themed treats and entertainment. 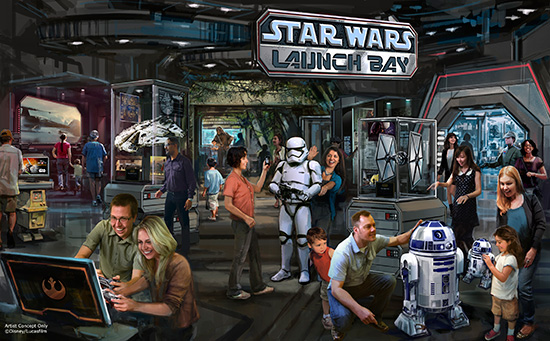 Star Wars Launch Bay is scheduled to open later this year at both Disneyland and Hollywood Studios.  This attraction will feature an interactive experience designed to take guests into the world of Star Wars:  The Force Awakens, as well as the previous 6 Star Wars films.  I’d expect to see these open just around December 18th, with the release of the new film.

Two new attractions will open in these lands.  The first one allows guests to take control of the Millennium Falcon on a customized, secret mission.  The other attraction will transport guests in the middle of a galactic battle. 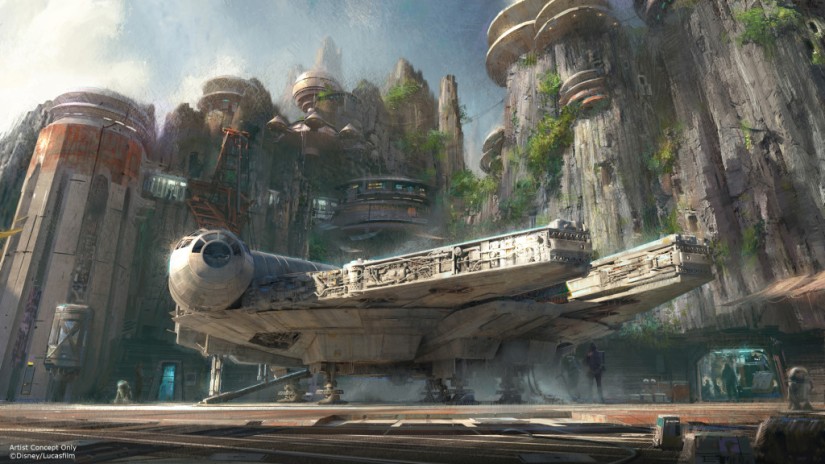 As far as the new 14 acre lands on both coasts, expect to be fully immersed in the Star Wars world.  The concept art for the lands looks incredible, as if you are really in a galaxy far, far away.  I’ll admit that I’m a bit disappointed in the timeline.  5 years is quite a while compared to Universal Orlando’s 3 year timeline to complete Hogshead and 2 year timeline to complete Diagon Alley.  But in true Disney fashion, you know it will be truly amazing.