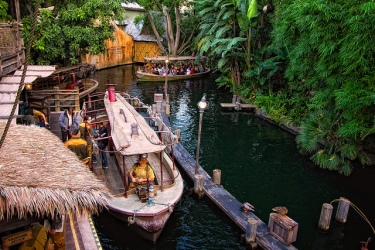 The space used to be home to the Adventureland Veranda until its closure in 1994, and has most recently been home to character meet and greets with Tinkerbell at Tinkerbell’s Magical Nook.  Tinkerbell has since been moved to the Town Square Theater.

The new restaurant is rumored to be named Skipper’s Cantina, and is where Jungle Cruise skippers earn extra cash when they aren’t manning one of the tour boats.  Since Liberty Tree Tavern is scheduled to reopen November 20th, I’ve got my fingers crossed that Skipper’s Cantina will also be open at that time.  We’ll be spending Thanksgiving at Disney, and I know my family would love to dine there.  Maybe if we’re lucky, we’ll run into an annual pass holder preview during our October trip!

Rumors also report that the restaurant will offer similar service as Be Our Guest with a quick service breakfast and lunch, and table service dinner.  I can only imagine how difficult advanced dining reservations will be once they open.